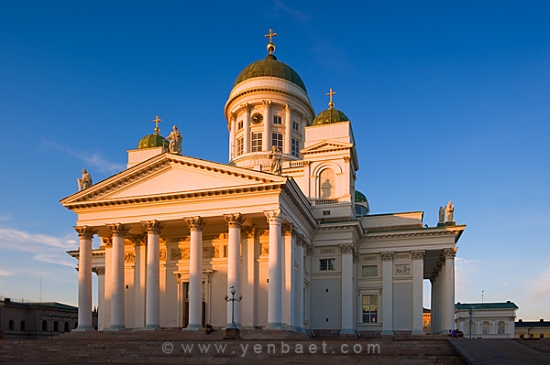 The white Lutheran Cathedral takes on some golden colors during magic hour, at 10:00 pm! In Helsinki, where one can experience white nights in the summer, it was hard to distinguish the end of night and the coming of morning, but it definitely is a city where one can savor twilight.

On my research about Finland in general, I came across this Finnish word sisu and found out that it means strength of will, determination, perseverance, and acting rationally in the face of adversity. It is also a word that is used to describe an understanding of the Finnish culture. The word sisu and its meaning is something that interested me the most in my reading. Apparently, the word is so popular that it has been used in many occasions, but what I liked the most is how Time magazine has described it: The Finns have something they call sisu. It is a compound of bravado and bravery, of ferocity and tenacity, of the ability to keep fighting after most people would have quit, and to fight with the will to win.

For a group of people who I thought were known to be fairly tolerant and mild-mannered, it’s a big surprise to me. If it were only for this sisu characteristic alone, I’d immediately fall in love with the place and the people even before arriving. But coming to Finland for the first time equipped with only little historical information, I wouldn’t have this as a first impression. This characteristic, I’d assume, is better found in a country with a more turmoiled past.

Since Helsinki is not an ancient city having only settled around the 18th century, there was really no grandiose architecture to speak of.  The neo-classical buildings in and around Senate Square give the city its own character and will remind you of its Russian tsarist influence. However, whatever historical significance this square has can quickly get lost once you step into the shopping street of Aleksi and the high-end shops of Esplanadi. One who has traveled around Europe will come to Helsinki not to be amazed by majestic-looking buildings anyway. If anything, I think one should visit Helsinki to re-energize and reaffirm to oneself the inner sisu that apparently all of us are capable of having, Finnish or not.

What I quickly noticed after having emerged out of the South Ferry Terminal was how cheerful and carefree Helsinki looked. It probably had something to do with the gorgeous weather that day and the gleaming blue skies, but with that factor aside, I think Helsinki can hold up on its own no matter what the weather. By quick observation, the city looks compact and intimate, its buildings and parks neatly arranged in an organized grid like a properly-set dinner table. The atmosphere exuded inexplicable warmth and friendliness that would remind you of home, wherever that may be.

There are a couple of structures that deserve recognition. The stark white Lutheran Church that takes the spotlight in almost every postcard rack has an unmistakable presence in Senate Square, perched on top of its own pedestal right up the stairs from Tsar Alexander II monument. It was there that I spent a good amount of endless Nordic twilight hour which lasted past midnight. And not far from this church, overlooking the South Harbor is another hard-to-miss attraction – Western Europe’s largest Orthodox Church, the Uspenski Cathedral.

My time spent in Helsinki was brief but I was lucky to be able to venture outside of the city for a quick visit to the island of Seurassari, the district of Toolo for Sibelius park, and  the charming town of Porvoo, all within a short bus ride from the city center. I enjoyed my trip to the outdoor museum in Riga, Latvia and did not think twice about visiting the one in Seurassari. It could be quite comforting to have a stroll in the woods and be momentarily transported in time by visiting centuries-old houses, not to mention, it was a nice escape from the humdrum of the city and a chance be closer to nature. 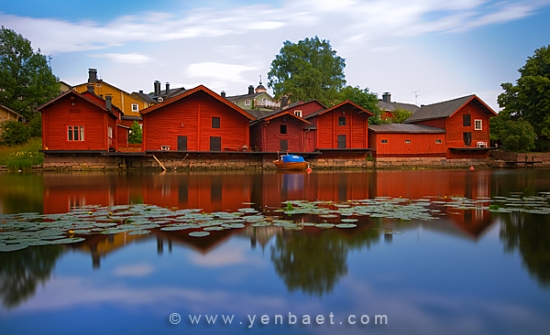 Porvoo, on the other hand, is a charming town which exudes character, much like Helsinki in a rural setting, bearing that same sense of intimacy and friendliness. I had spent a good hour, or perhaps more (I lost track) on the riverbank trying to freeze the moment around the perimeter of the old cobblestoned town – a picture-perfect scene of old houses in a row and boats softly bobbing on the water. Even the bus ride to and from Porvoo was worth skipping a few winks – the famous red-ochre wooden houses that made Porvoo famous seem to continue on to the green countryside and draw up a dreamy setting under soft-filtered afternoon light that followed us all the way back to the city. 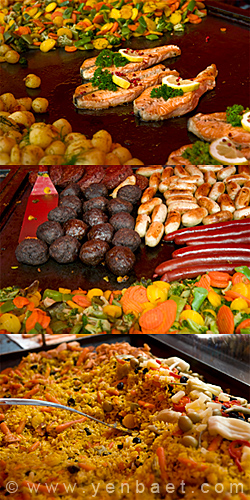 The Finns surely love their fish and meat. Salmon on the grill, reindeer meat and sausages, and seafood paella can be found at Kauppatori.

Back in Helsinki, one definitely needs to dig deep down their pockets when eating out or when one is brave enough to shop. But I found an inexpensive place worthy enough of a visit especially on a nice summer morning. Kauppatori or Market square down Cholera basin, sandwiched between dancing fishing boats and cruise ships and the shadows of the Presidential Palace is the perfect place to sample Finnish cuisine. Under the watchful eyes of hungry seagulls, this is where I enjoyed food the most. From homegrown and arctic wild berries to varied seasonal fish to Nordic wool and reindeer skins – the market stalls are brimming with Finnish culture and make you feel at home alongside city dwellers who also shop here for their provisions.

For lunch, I tried lohikeitto – a traditional Finnish winter soup which is cream-based salmon chowder. As a fish lover myself and one who grew up eating all kinds of fish, I’m no stranger to this kind of cuisine. I definitely don’t mind deep-fried vendace or Baltic herring, and the gravlax I had for breakfast was a unique but effective way to whet the appetite.

Helsinki is called “The Daughter of the Baltic,” perhaps for obvious reasons as it is surrounded by sea and archipelago. All the water presence around it is calming in itself, and the city is a reflection of this soothing quality. It certainly is not fair to get to know Helsinki for a mere couple of days like I did, as there seems to be more to it than meets the eye. So until the sea beckons to me once again and I see her daughter along with her endless twilight await me with open arms, I will practice her sisu and be a Finn for some of my days.

Deep-fried vendace can be largely seen in the markets and is a staple in Finnish cuisine. Vendace a small freshwater fish found mainly in the lakes of northern Europe and Russia, but also in the Baltic Sea.

The Sibelius monument consists of more than 600 hollow steel pipes welded together in a wave-like pattern. The purpose of the artist was to capture the essence of the music of Finnish composer Jean Sibelius. A sculpture of the composer can also be seen on the right. 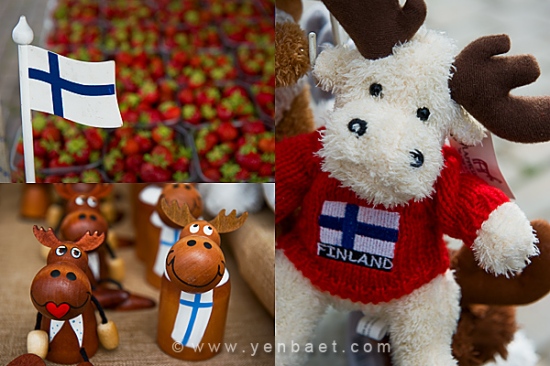 Things you can find at Kauppatori market - from homegrown berries to stuffed and wooden moose. Like the reindeer, the moose has become an exotic symbol of Finland. It is interesting to note though, that only about 20-30% of the souvenirs in Finland are actually manufactured there; most of it comes from Asia and the rest of Europe.

Links to My Portfolio: